A flag hanging on the Tabernacle ceiling with an illuminated 45th star signaled Utah’s admission as a state.
Credit: Courtesy of the Utah Historical Society

A Western Union agent ran into Salt Lake City’s Main Street and fired two gunshots into the air. That signal let Utah residents know a telegram had arrived from United States President Grover Cleveland. It was 9:13 a.m. on Jan. 4, 1896, and Utah had been accepted as the union’s 45th state after a tumultuous nearly five-decade political campaign, the longest territorial period for any state.

Achieving statehood required Utahns to overcome long-running fights with the U.S. government. That included charges of Utahns’ disloyalty to the union, which led to an early armed standoff known as the Utah War, as well as a later federal law disincorporating The Church of Jesus Christ of Latter-day Saints for the practice of polygamy, which also stripped established voting rights from the territory’s women.

Charles C. Richards, acting governor of Utah Territory, proclaimed the next Monday as Statehood Day. He ordered schools and businesses closed on January 6 so residents could celebrate “in a manner becoming a free, intelligent and patriotic people,” according to his proclamation published on the front page of Salt Lake City’s weekly “The Broad Ax,” one of several Black-owned Utah newspapers.

The news spread across the state quickly. That Monday, residents woke up to a “din surpassing anything they had heard before,” wrote Audrey M. Godfrey in “All Hail! Statehood,” a 1995 Utah Historical Quarterly article. That noise was made by “guns, whistles, and bells of every variety” as well as “anvils, dynamite, yelling, singing, drums, and bands for two hours and then intermittently throughout the day.”

One Utahn labeled the racket "bedlam," while a newspaper reporter termed it "hilarious pandemonium." “Like Fourth of July in winter,” another reporter proclaimed, as Utahns spilled out into town streets on a sunny, cold January day, marching in community parades, attending local programs and dancing at inaugural balls. 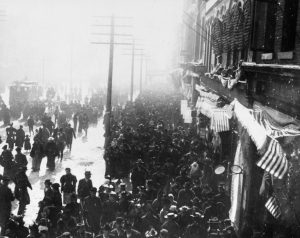 Utahns flooded the streets in celebration on January 4, 1896. Credit: Courtesy of the Utah Historical Society
Read the coverage in "The Broad Ax"

"Utah is as happy as a boy with a new pair of red-topped boots,” wrote an Eastern correspondent. "Everything and everybody, even to the babies, smiled and rejoiced,” wrote a Snowville reporter.

From California to Polynesia

At the Inauguration ceremony at the Salt Lake Tabernacle, Wells, the then-36-year-old governor, offered a carefully considered address, calling upon residents and the state’s newly installed lawmakers to overcome complicated religious and political differences. One critic wasn’t especially impressed by the conciliatory tone of the speech, calling it “too extremely long” and “enough for four addresses.”

Significantly, the governor acknowledged one right anchored in the state’s constitution — that Utah had granted suffrage to its female citizens. Wells congratulated women “on their entrance into the full enjoyment of civil and political rights.” One program highlight came when Wells was presented with the pen President Cleveland used to sign the statehood proclamation.

“Though we have seen some interesting days in Utah, We have Never seen such a Day as this" is how Wilford Woodruff, president of The Church of Jesus Christ of Latter-day Saints, described statehood celebrations in a letter to his son. 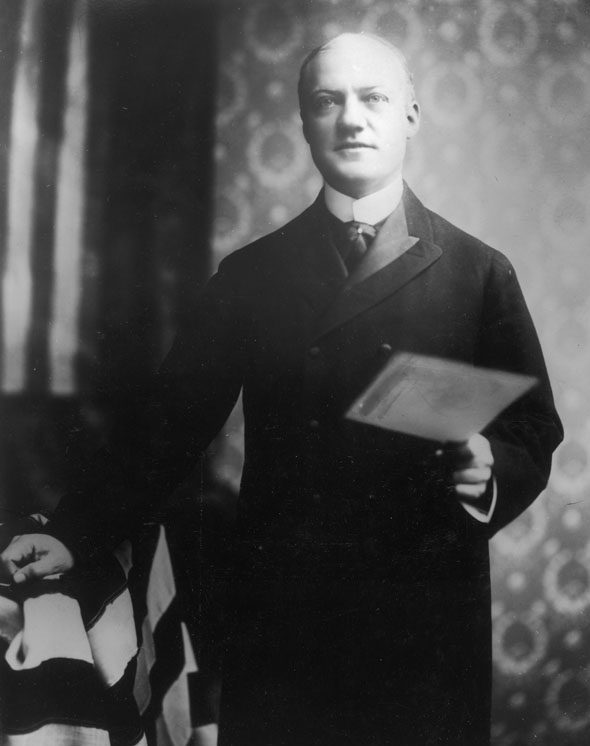 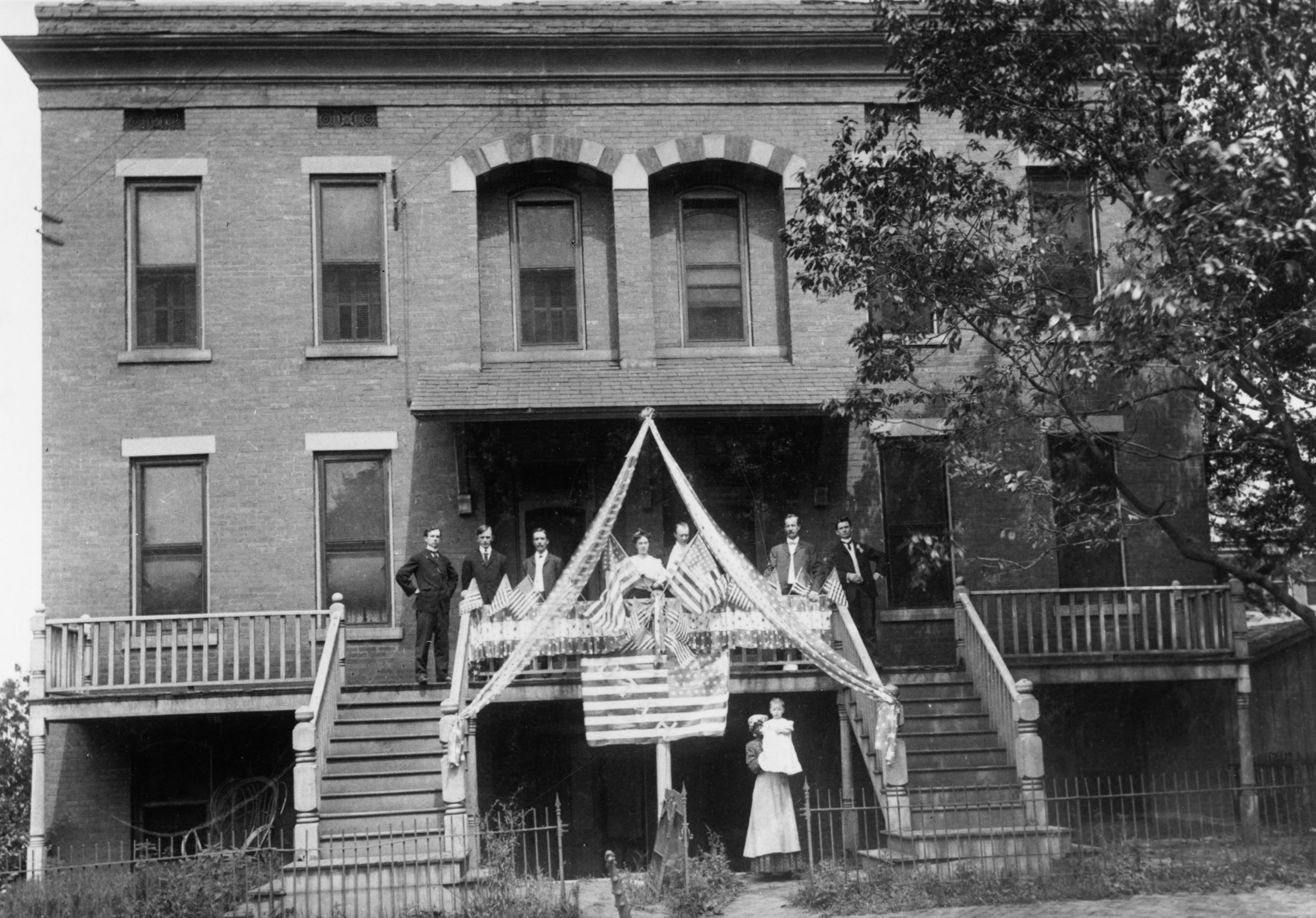 Utahns decorated their homes in celebration. Credit: Courtesy of the Utah Historical Society

Across the State with Utah Style

On Statehood Day, towns across the state hosted parades and balls, as well as programs featuring local talent (such as in Ephraim, where prominent Utah artist C. C. A. Christensen recited an original poem), and many choral renditions of Stephen Evans’ newly written song, “Utah, We Love Thee,” which became the state song and is still the state’s designated hymn.

Many towns, such as Fairview and Parowan, feted older settlers with cheers, while many local programs acknowledged female voting rights. In Newton, three cheers were offered for “the Ladies,” while in Parowan, the Woman’s Temperance Association passed out yellow ribbons. In Huntsville, women opened their new brick two-story Relief Society hall, then marked the celebration of statehood and suffrage by serving dinner.

At the railroad station in Coalville, residents cranked up a massive, loud steam engine. In Corinne, the courthouse bell was rung with such spirit the $200 gong cracked. In Beaver, groups such as the Woman’s Suffrage Association and Latter-day Saints’ Relief Society competed to decorate vehicles, as did church youth organizations and Sunday School groups.

Manti hosted a sunrise service in the town square, “with anvils and dynamiters at the center, cannoneers on the right, musketeers on the left, shotgunners in the front,” encircled by people ringing cow and sheep bells. A town parade featured a man riding a burro dressed as Uncle Sam, followed by a squad carrying a banner: "Utah! One more strong arm for Uncle Sam.”

In Park City, when officials didn’t plan an event, 150 youth formed their own parade and marched through town serenading residents and local businesses.

In Kamas, men competed in ball games while children were offered sleigh rides accompanied by the Kamas Brass band. “Everybody and their cousin” turned out for the Clarkston program, which featured speeches, a comic song, a talk in German, and uniquely, a performance where male dancers invented forty-five new steps.

Women led parades in Coalville and Brigham City, which also featured a contingent of forty-five women, representing each state in the union. In the Nephi parade, one horse-pulled sleigh featured 27 women representing each of the then-established counties. High spirits and firearms led to injuries, such as the Brigham City resident who was accidentally shot in the back during a parade, and a young man in Fairview who suffered a facial wound, but returned to festivities after receiving stitches. In Fillmore, the town’s Liberty Hall was the site of a festive ball, but the building burned to the ground afterwards, the flames thought to have been caused by an exploding lamp. 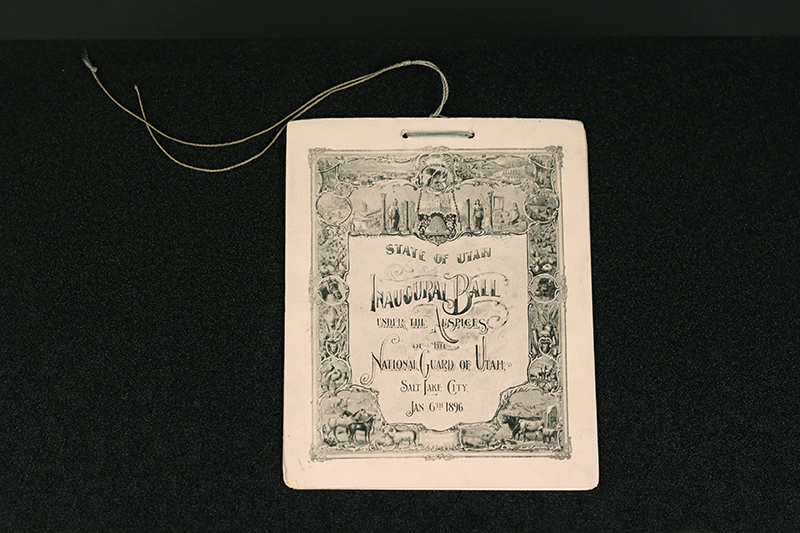 A program and dance card for the ball held on January 6th, 1896 by the National Guard. Credit: Courtesy of the Utah Historical Society.
Suffrage at StatehoodWho couldn't vote
Henrietta ClarkLegislative clerk and cyclist

As night fell in Utah on Jan. 6, 1896, candles and lanterns blazed in windows across the state, answering a call from the new governor to illuminate the passage into the light of statehood.
View Bibliography
Voices: Discord and Harmony | Content

Utah woman sews her love into the country’s largest flag


At 20, Margaret Glade was the youngest of six seamstresses recruited to craft 1,296 yards of bunting into what would be considered the world’s largest flag — and the first to feature Utah’s 45th star. The volunteers worked for a week, eight to ten hours a day, to finish the flag that Margaret described as requiring a crew of “eight strong men” to lift it.

“The hardest and most tedious work” was appliquing the stars to both sides of the blue field of the flag, Margaret recalled. Surrounded by yards of fabric, the volunteer crew could tell the finished banner would be too big to fly on a pole.

Instead, the statehood celebration committee designed it to cover the domed ceiling of the LDS Church Tabernacle, where the state’s governor, Heber M. Wells, and lawmakers would be inaugurated on Jan. 6.

During the program, Utah’s star, the 45th, was illuminated with an electric light. As Margaret watched the air cause the flag ripple across the ceiling, she was moved to tears, the seamstress wrote in a remembrance some 60 years later. She wanted her grandchildren to know she had sewn her love for her native state into the cloth.

“I felt this flag was saying, “Proudly I wave over you, home of the brave and land of the free.”

That momentum was halted in 1887, when Utah’s female voting rights were stripped as part of the Edmunds-Tucker Act, which also disincorporated the Latter-day Saint Church and punished polygamists with fines and imprisonment.

After Latter-day Saint leaders agreed to disavow polygamy, Utah women advocated for the return of their voting rights, which they had exercised for 17 years.

While women’s voting rights were written into Utah’s Constitution, the Enabling Act prohibited women from voting to ratify the state constitution in the November 1895 election because the federal definition of a voter — that is, a male citizen — was assumed. Sarah E. Anderson agreed to register to vote as a legal challenge. After she was denied registration, she sued the registrar, and her lawsuit was appealed to the Utah Supreme Court, which opined women citizens couldn’t exercise voting rights until the state’s constitution was approved.

Despite supporting voting rights for women decades before their national colleagues, Utah legislators weren’t as supportive of the rights of the region’s Indigenious people. A law passed shortly after statehood prohibited reservation residents from voting in United States elections. After legal challenges, the Utah law was officially changed in 1957.

At statehood, Utah’s Black residents were already citizens, thanks to the 14th Amendment passed at the end of the Civil War, but history doesn’t record whether Black votes were suppressed or not at local polls. “There was certainly racism, but without more records, it’s impossible to say whether that racism kept black women from going to the polls and casting ballots,” writes Katherine Kitterman, historical director for the nonprofit Better Days 2020.

In an 1896 photograph of Utah’s first state representatives, there’s Henrietta Clark standing in profile with her bicycle in the front row. Clark was hired as a clerk to be an officer of the legislature, symbolic of the opportunities opening up for women as Utah became a state. Her bicycle represented the freedom women earned through using this new form of transportation.

Tragically,  a “Salt Lake Tribune” article published just months later recounted an accident when “Miss Henrietta Clark, a well-known stenographer,” hit a horse and buggy while riding her bicycle. She suffered serious injuries, which may have curtailed her independence and burgeoning career.

Lafrance, Adrienne. “How the Bicycle Paved the Way for Women’s Rights.” The Atlantic, June 26, 2014. https://www.theatlantic.com/technology/archive/2014/06/the-technology-craze-of-the-1890s-that-forever-changed-womens-rights/373535/